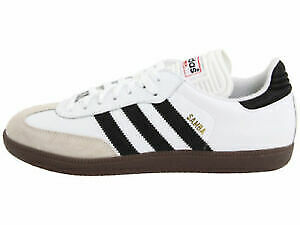 The adidas Samba is a men’s athletic footwear line featuring a black leather exterior with white stripes and a tan gumsole. Adidas Samba was introduced in 1950 and created to help soccer teams train on icy ground. They have made many appearances in movies, television, and music videos since the 1960s.

Did soccer players wear Sambas in the past?

Soccer teams used the Sambas as soccer shoes to train on icy ground. Since soccer season in Europe runs from fall to spring, teams played in many weather conditions. In winter, the outdoor fields become icy and hard. The Samba gumsole features a suction designed to help players keep their footing while they acclimate to the field condition.

What media has the adidas Sambas been featured in?What are the different styles available?

Here are some models of the adidas Samba Classic:

Content provided for informational purposes only. eBay is not affiliated with or endorsed by adidas.