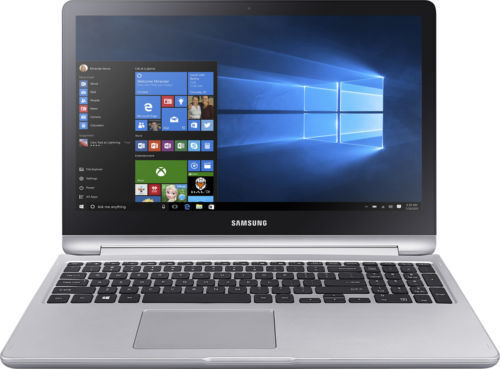 Laptops and netbooks are portable devices that can be used for a wide range of computing tasks and are equipped with numerous features, such as a backlit keyboard and an Intel core processor. These laptops include anywhere from 1GB to more than 16GB of memory, depending on the exact model that you select. These laptops are also equipped with hardware connectivity ports, including USB 2.0 and 3.0 ports, HDMI ports, and microSD card slots.

What are some main features of Samsung laptops?

Practically every laptop created by Samsung is equipped with a built-in webcam. These webcams usually offer a screen resolution of 720p or 1080p, both of which are counted as high definition. Many of these notebooks and laptops are also outfitted with a touchscreen that allows you to navigate the device in a variety of ways, either through the usage of the touchpad near the keyboard or with the display itself. Some Samsung models feature full Bluetooth functionality, which is wireless technology that can connect with other Bluetooth devices. A small number of these laptops also include features like virtual reality functionality and three-dimensional cameras that add depth to the photos you take.

Which operating system is included in these laptops?

With the range in time during which these laptops have been released, they can come with many different operating systems already installed. The two most common operating systems in these Samsung devices include Windows 10 and Chrome OS, both of which have their own unique features. Windows 7 is also installed in many of these laptops, while other Windows versions that could be installed include XP, Vista, Windows 8, and 8.1. A smaller selection of these notebooks are equipped with Linux and DOS operating systems, while a variety of the Samsung models available to you do not include a preinstalled operating system, which means users may choose which one they install.

Which colors are available with these laptops and netbooks?

Given the fact that there are so many different Samsung models to select from, the laptops available to you come in a wide array of colors. The majority of these laptops come in black, while the second most common color is silver. Many of these models include white exteriors and black interiors for the keyboard area while others are blue. Some of the less common colors that you can find with these laptops include green, gold, red, and pink. It should also be noted that some of these models have one color on the outside and another on the inside.

Content provided for informational purposes only. eBay is not affiliated with or endorsed by Samsung.