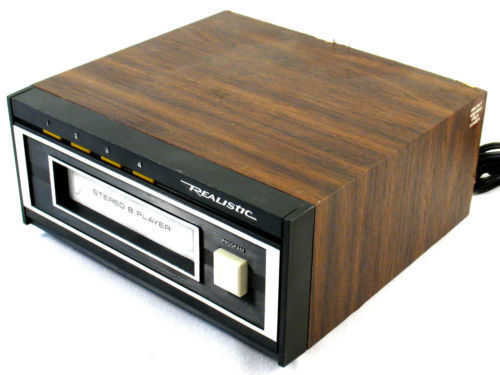 From the mid-1960s through the 1970s, the 8-track tape was the format of choice for music lovers on the go. All the major audio equipment manufacturers built decks for homes and cars, and portable players for everywhere else. Realistic was a well-known brand, and many are still available for anyone who collects these vintage cassettes.

What is an 8-track tape?

8-track tapes were the first successful method for playing a tape in an enclosed case. Playing an 8-track is as easy as pushing the cassette into the player and pressing the play button. The tape winds around a central spindle and rewinds itself as it plays so it can play continuously. It was the first cartridge format to gain frequent use in cars.

What is a Realistic 8-track player?

Why is it called an 8-track?

The tape holds 8 segments, called tracks. There are four programs, like sides of an album, and each has two segments, one for the left speaker and one for the right, to provide stereo playback. This gives it a longer playing time, allowing longer selections of music on one cartridge. More than one long-playing record, or LP, fits on a single 8-track tape.

What models are available?

Realistic made decks for every purpose. The Car Stereo 8 Model 12, for example, was a familiar line for car stereos. Under the TR line, Realistic produced home decks that could play or record, and the Realistic TR-888 Triple Play 8 could hold three tapes at once that played in sequence for hours of uninterrupted music. Because the 8-track cartridge played continuously, it was an ideal way to play music for parties.

What types of tapes are available to play?

Because the 8-track format was so well-known, a huge treasure trove of music and other content is still available. All the major recording artists of the time put out a cartridge version of each album they released. Having a player for this vintage format is a valuable part of any collector’s audio equipment.