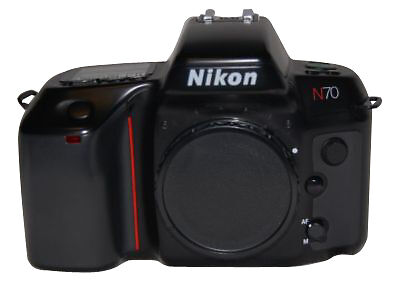 Despite the advancements in digital camera technology, many photographers are rediscovering the joys of shooting with film and looking for well-maintained 35mm SLR cameras to add to their collection. Having produced film cameras since 1948, Nikon is one of the leading manufacturers of SLRs, and a brand that many look to when purchasing vintage cameras. Combined with its F-mount series of cameras, it offers both entry-level and professional 35mm film cameras, with features that were cutting edge for their time.

What Is an SLR?

SLR stands for single-lens reflex and refers to a camera in which the arrangement of the viewfinder, prism, and mirror enables you to view the exact scene you will see exposed on the film. They differ from viewfinder cameras where the viewfinder is separate from the lens and may render a slightly different image from that which you see.

What Should You Look for When Buying an SLR 35mm Film Camera?

While SLR film cameras are becoming rarer, you can still find a wide variety of secondhand and vintage SLRs on the market. The model thats right for you will probably come down to the features you are looking for and your budget.

What Are the Advantages of Film Photography?

Film cameras are a great way to understand how cameras work as they force you to think about what each part of the camera does and what goes into composing a great shot. Unlike digital cameras where you can just point and shoot, then make edits later in post-processing software, film photography requires careful consideration of elements like lighting and the lens you use before you press the shutter release.

Content provided for informational purposes only. eBay is not affiliated with or endorsed by Nikon.