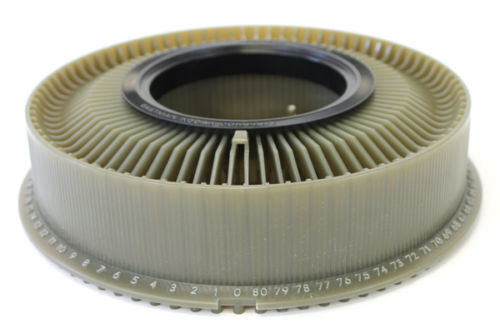 If youve inherited boxes of 35mm slides or have some that hold memories of your own, you need a way to organize and view them. You can store them right in your Kodak carousel slide trays, labeling each group by subject and year so that you can easily find the pictures you want to share with family and friends. You may need some extra slide trays if you have a large number of slides because each unit holds between 80 to 140.

What are the features of a Kodak Carousel 80 slide tray?

The black plastic slide tray holds 80 35mm images and projects them one at a time using a rotation-and-gravity selection method. Some of the features that characterize the Kodak carousel slide tray are:

Which viewing devices are compatible with which carousel-type trays?

Although Kodak dominated the carousel slide projector market over the second half of the 20th century, companies such as Sawyer had their hand in the game as well. Be sure to verify that the Kodak carousels you purchase are compatible with the machine you plan to view them with.

How should you store your slides?

Because Kodak made carousel projectors between 1961 and 2004, your 35mm image library is likely to be anywhere from 14 to 57 years old. Some of the factors that affect the longevity of these images are how they have been stored previously and what kind of environment they have been kept in, including factors like temperature, light, and moisture. If your color images predate the mid-1970s, the colors are typically less stable than newer ones. You should take the following steps to prolong the memories they hold:

When did Kodak introduce its carousel projector?

The Eastman Kodak Company produced its first viewer with a rotating slide tray, called the 550, in 1961, using a design it purchased from inventor Louis Misuraca.

Content provided for informational purposes only. eBay is not affiliated with or endorsed by Kodak.