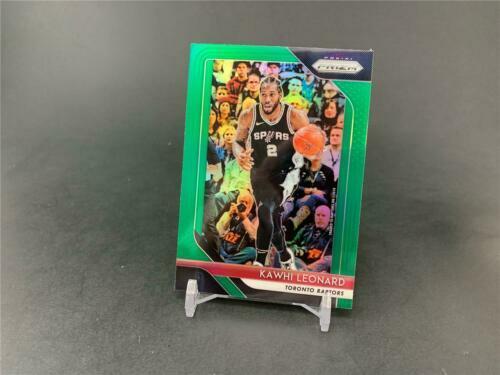 Get Your Kawhi Leonard Basketball Trading Cards on eBay

For the NBA season, a wave of basketball trading cards has been released to the general public. This includes athletes such as Toronto Raptors player, Kawhi Leonard. After a long offseason and a trade from the San Antonio Spurs, you can view one of the leagues premier players on their own card.

What teams can you view Kawhi on?

New and used basketball trading cards include stats and pictures of players from all of the teams theyve played on. You have the chance to purchase Kawhi Leonard cards from his days with the Spurs and the cards with him in his Raptors jersey. His Spurs cards can be found anywhere, whereas his Toronto Raptors cards will be released shortly before the season starts.

What stats can you find on the basketball cards?

All cards have a "career" section where they show the averages of all years the players have played so far. If you are looking for Kawhis stats from his first few years in the NBA, you can collect his cards from the years 2012 to a year such as 2014 (his Finals MVP season). You will get different stats depending on what year the card is from.

What other features are included on the cards?

Along with pictures from in-game performances from the athletes, you can find statistics from the year the card is from in addition to their then-career statistics. What separates the cards from each other is a quote that is usually taken directly from them, along with an anecdote from the season. Sometimes the quote will come from coaches or other peers from the league and sometimes the quotes will come directly from the athletes.

What color jersey is Kawhi Leonard wearing on his cards?

You can purchase cards of the NBA athlete in all of his different uniforms from both professional NBA teams he has played for. All of these colors can be found on both his Toronto Raptors and San Antonio Spurs jerseys when you purchase his trading cards. These colors include the following:

Content provided for informational purposes only. eBay is not affiliated with or endorsed by the NBA.