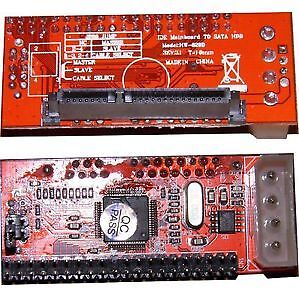 IDE EIDE PATA female drive adapters allow you to install various types of hard drives to a computers motherboard using a pin-based interface. These adapters are unbranded and can work with various ports and plugs. The product description for each unit will specify the exact capabilities of the adapters.

IDE stands for integrated drive electronics. This is the widely used electronic interface between the motherboard of the computer and the data path of a computers storage units or devices. While the IDE was developed to be compatible with IBMs PC Industry Standard Architecture, the interface can also be used in computers with other protocols and bus standards. IDE is adopted by the American National Standards Institute with the name ATA or Advanced Technology Attachment. In late model computer units, the IDE is preinstalled into the motherboard.

This term stands for Enhanced Integrated Drive Electronics. This is how your computer and your mass storage device will interface with each other. Unlike IDE, this protocol can handle larger hard drive disks of over 528MB of storage. Additionally, this protocol can provide faster performance for the hard drive and can support other functions such as direct memory access. This protocol can also support tape devices and CD-ROMs via an AT Attachment Packet Interface. The controller can be added to a computers motherboard using a card slot. This protocol is adopted by the American National Standards Institute with the name Advanced Technology Attachment-2 or Fast ATA.

PATA stands for parallel ATA. This term was originally known as attachment AT. It is the connector interface standard of various computing hard drive and other storage units. The storage units can be floppy disk drives, hard drives, or optical disk drives. PATA uses AT Attachment Packet Interface (ATAPI) and AT Attachment (ATA) standards on all of its units. The standards allow consistency of all the attachment adapters such as the number of pins. The pin count will be consistent with these attachments. The maximum length of the cables tends to be about 18 inches, including the connectors on both ends. That means that these connector cables will usually be found in internal computer storage interface setups. Below are some technical specifications of the connector.

What adapter options are there?

There are a number of different type of adapter options available. Among the different type of adapter options available are USB to USB adapters. That includes all version of USB including USB 1, USB 2, USB 3, and their variants. There are IDE to SATA adapters, USB to SATA adapters, and SATA to IDE adapters. The product title and the description will specify the adapters specific capabilities such as the pin count, pin type, and product dimensions.