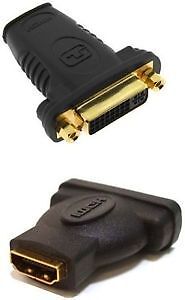 DVI stands for digital video interface. Since 2000, this has been the standard interface that connects a video controller, such as your computer, to a display device, which can be a flat-panel screen or a computer monitor. This standard is available in two primary modes: the DVI-D mode, which is digital only, and the DVI-I mode, which is digital and analog. While DVI is mostly known as the prime interface of post-2000 computers, it is also found in DVD players and flat-panel television sets.

They have various looks and styles. However, there are consistent details that will be found in every DVI female-to-female monitor AV cable and adapter. If the product is a cable, then it will have a long line located between the two interfaces. The two interfaces will both be female, meaning that theirs interface will be depressed into the connector.

What can these items be used for?

These items allow you to transmit audio and visual signals from your computer to your monitor or a flat-panel TV. The cable allows for plug-and-play, so no installation or complex setup is required. The adapter offers the flexibility to use a variety of interfaces such as DVI, HDMI, or VGA. The cable and the adapter allow transmission of the signal with no degradation in quality.

What are the technical specs of the DVI connector?

The following technical specs contain information for the DVI-D mode as well as the DVI-I mode: