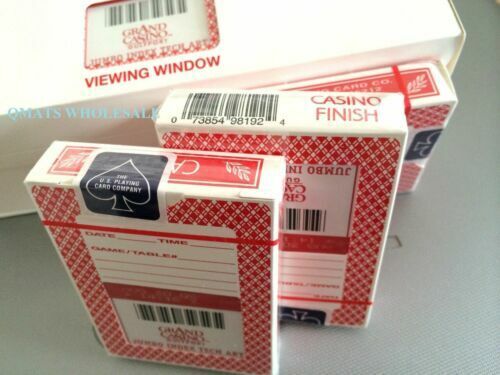 Casinos have to periodically remove playing cards from circulation to prevent gamblers from using marks on them to gain an advantage. When the dealer takes decks off the table, the casino playing cards are made available for use by members of the general public.

What are some of the features of casino cards?

Most casino decks were used in actual play at the poker and blackjack tables of a real casino, and theyll usually feature the name of the gambling establishment on their backs. Most of them have jumbo index labels printed on them, which means that the rank and suit of the card is printed larger than whats normally found on playing cards. This can make it easier to read the cards. A majority of decks also have air-cushion coatings.

What does it mean if decks include canceled cards?

Casinos often stamp a hole straight through the center of the deck to show that theyve already been used in play. This helps to reduce fraud, and it’s also a way to show that the pack of cards was used at a genuine table in an official game. Other establishments prefer to clip the corners or trim a bit of material off the edges for the same reason. Modifying playing cards in any of these ways doesnt influence play at all. Each card receives the same treatment equally, which makes these playing cards useful for gaming outside of their original homes.

Do casino decks include all the normal playing cards?

Most decks come with 52 playing cards that are organized into the standard French suits. While many gambling tables do offer poker, jokers are rarely used because wildcards arent generally part of Las Vegas poker rules. Otherwise, these decks have all the features of regular playing cards and come with a labeled seal to show that the dealers counted to make sure each card was there.

What is a full sheet of playing cards?

Playing cards that got pulled off the factory press arent cut, though they usually still feature the name of the casino they were destined for on the back. These card sheets represent unfinished decks. An inspector might have found something wrong with one of the playing cards. Dealers might have also stated that they had more than enough cards at the moment. In some cases, the cards might have perforations but still be held together as sheets.

Why are some decks marked as obsolete?

Obsolete decks contain playing cards that feature the name of a casino thats no longer in business. Since the card ranks havent changed, these obsolete cards can still be used to play standard card games.